Salem, Ore. – “Oregon Bounty” an art exhibit comprised of large oils and wax on linen mounted on American Easel panels (made in Salem) will be displayed at the Oregon State Capitol West Galleria from August 23 to October 20, 2017. The art, by Eugene-based artist Robert Canaga, depict Oregon vineyard landscapes and represent an understanding of terrior – how environmental factors play a part in crop’s epigenetic qualities. This exhibit aligns with the Capitol’s October 8 event titled “Oregon’s Bounty: A Celebration of the Harvest.”
Canaga has done a lot of work in Southern Oregon and his solo exhibit at the Coos Art Museum landed him a space in their permanent collection which is how he came to be selected to exhibit at the Capitol. This exhibit also fulfills a lifelong dream of Canaga to see his professional works at the Capitol. 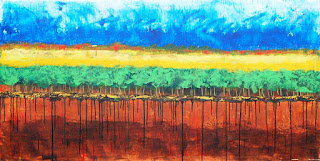 “The reason it has been such a dream is that Gov. Tom McCall had one of my watercolors in his office in 1968,” Canaga explains. He had sent it to the Governor when he was just a child and remembers seeing it on the wall of his office in a photograph.

Canaga was born in Oregon and is known as one of the state’s most experimental printmakers. He currently focuses on abstract painting in oil, raw pigments and wax. His involvement in the arts community spans decades. He is current chair of Travel Lane County, and former curator at The Gallery at the Watershed in Eugene and at Opus6IX Gallery. His work is collected nationally. Canaga is also owner of Robert Canaga Studio in Eugene. More information about the artist can be found at http://opus6ixgallery.blogspot.com/. 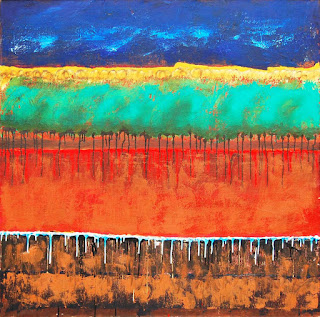 Canaga will be available to meet during an artist’s reception at the Capitol on Thursday, September 22 from 4 to 5:30 p.m. The public is welcome to attend.


For more information about the “Oregon Bounty” exhibit, please call Visitor Services at 503-986-1388 or visit www.oregoncapitol.com. The exhibit is free and open to the public during building hours, Monday through Friday, 8 a.m. to 5 p.m. excluding holidays. Parking around the Capitol is metered.
Posted by Robert Canaga at 4:37 PM